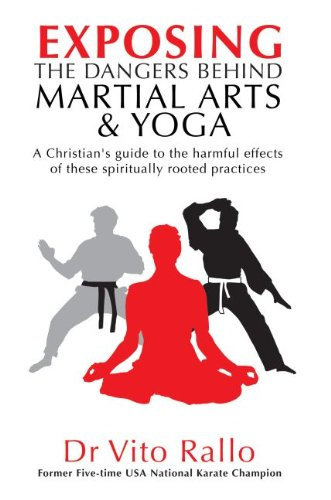 The author of this book, a former instructor and competitor, with 30 years' experience, was also a five-time USA National Karate Champion in 1989 and 1990 in Chicago and New Orleans. (These professional tournaments were sanctioned by the AAU "Amateur Athletic Union.") Dr. Rallo was also an adjunct professor in athletics in the 1970s at the University of MO at St. Louis as well as Lindenwood University in St. Charles, MO. He has a Doctorate of Divinity from Ames Christian University. Perhaps you are thinking about getting involved in martial arts, or maybe you are already involved. Or, you just don't feel right about these far eastern activities, but you're not sure why. Maybe you've heard the pros and cons about whether Christians should participate and you are simply confused. As Dr. Rallo reveals the uncompromised truth, he convincingly puts to rest all debate about this highly controversial subject. His book is thoroughly documented and well-researched. It contains the fascinating story of how the author entered into the highest ranks of martial arts and how and why he came out of it. It leaves no stone unturned as it thoroughly exposes the many harmful effects of these practices, which are rooted in the false religions of Hinduism and Zen Buddhism.

Trained by the best Japanese instructors in the US, Vito rose to run his own dojos, to coach professional athletes and train law enforcement agencies. He was the USA National Karate Champion five times, practising the highest level of martial arts. Following his conversion to Christianity, Vito began to question how his beliefs were compatible with the practice of martial arts, and undertook study and Biblical training. He now resides in Florida with his wife Pat where they minister to the Body of Christ.